A Tribute to Vivien Jones – A Cornerstone of Centaurs Lacrosse

Vivien joined Centaurs feeling that she had given much to her previous club as an active committee member, and had lost some of the pleasure of simply ‘ playing’. She relished her start to our club and quickly enjoyed new friendships and a new social life! As if typical of Vivien though, she soon realised the need for her input into the organisation and smooth running of the club. She helped form a committee, held the annual AGM at her house, re introduced the club Most Valuable Player and Improved Junior Player awards and drafted the club constitution and was determined that we would achieve sportsmark and recognition as a club. She invested much into the club both in terms of time and personal finances nIt was without doubt that she was voted as president of the club and she will always remain so in spirit.

Everyone in the club loved her!

She played for as long as she could possibly do so despite her long term battle with cancer and treatments. Even when she was not able to guide and inspire on the pitch she continued to support the club off the pitch as coach and club president.

Many of us would try to contribute to team talks and add an opinion but when Vivien spoke there was an eerie silence and everyone simply listened. You could sense the respect and warmth for her as she made real sense with team tactics and game strategies. Every individual wanted to work hard for her no matter how young or old, experienced or inexperienced.

Her final contribution came in October this year when we were delighted to have her as out coach once again- little did we know this would be the last time.

No one can deny what an enormous impact she has had on the club. She has been an inspirational player, coach and friend. She leads by example and consistently demonstrates moral integrity and endeavour. She is the definition of a true sportswoman.

The club will miss her greatly but she will forever remain a rock of the club and a Centaurs legend.

Thank you Vivien for all the memories and love. 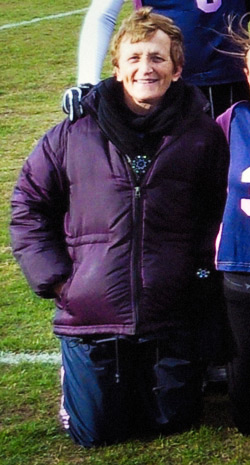